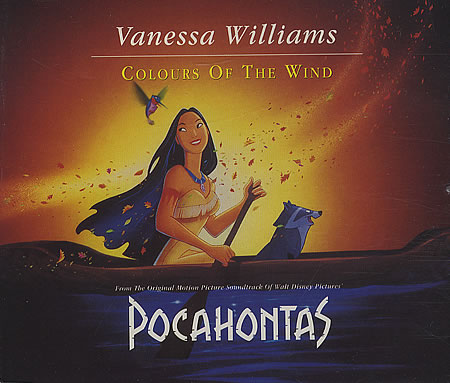 "Colors of the Wind" is a song by American recording artist and former Miss America winner Vanessa Williams, from Disney's 1995 animated feature film, Pocahontas. It was written by composer Alan Menken and lyricist Stephen Schwartz. Originally recorded by American singer and actress Judy Kuhn in her film role as the singing voice of Pocahontas, "Colors of the Wind" served as the film's theme song. Williams' version of the song was released on May 23, 1995 as the lead single from the film's soundtrack. A pop ballad, the song's lyrics speak of respecting nature and living in harmony with the Earth's creatures. Show Colors of the Wind (Pocahontas soundtrack) piano sheet

Vanessa Lynn Williams, known professionally as Vanessa L. Williams or Vanessa Williams, is an American singer, actress, producer and former fashion model. In 1983, she became the first American woman of African and Caucasian American ancestry to be crowned Miss America, but a scandal arose when Penthouse magazine bought and published nude photographs of her. She relinquished her title early and was succeeded by the first runner-up, Suzette Charles of New Jersey. Williams rebounded by launching a career as an entertainer, earning multiple Grammy, Emmy, and Tony Award nominations. She is arguably the most successful former Miss America winner in the field of entertainment. More piano sheets by Vanessa Williams