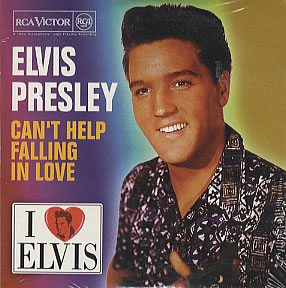 "Can't Help Falling in Love" is a pop song originally recorded by American singer Elvis Presley and published by Gladys Music, Elvis Presley's publishing company. It was written by Hugo Peretti, Luigi Creatore, and George David Weiss. The melody is based on "Plaisir d'Amour" (1784), a popular romance by Jean Paul Egide Martini (1741-1816). It was featured in Elvis Presley's 1961 film, Blue Hawaii. During the following four decades, it went on to be covered by numerous artists, like the British reggae group UB40, whose 1993 version topped the U.S. and UK charts, and Swedish pop group A-Teens. Show Can't Help Falling in Love piano sheet

Elvis Aaron Presley was an American singer and actor. A cultural icon, he is commonly known by the single name Elvis. One of the most popular musicians of the 20th century, he is often referred to as the "King of Rock and Roll" or simply "the King".
Born in Tupelo, Mississippi, Presley moved to Memphis, Tennessee, with his family at the age of 13. He began his career there in 1954, working with Sun Records owner Sam Phillips, who wanted to bring the sound of African-American music to a wider audience. Accompanied by guitarist Scotty Moore and bassist Bill Black, Presley was the most important popularizer of rockabilly, an uptempo, backbeat-driven fusion of country and rhythm and blues. RCA Victor acquired his contract in a deal arranged by Colonel Tom Parker, who went on to manage the singer for over two decades. Presley's first RC... More piano sheets by Elvis Presley