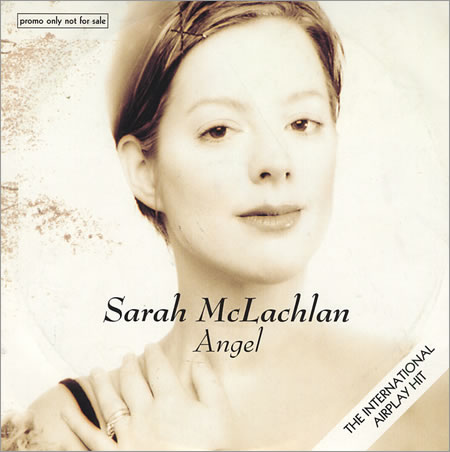 "Angel" (sometimes mis-titled as "In the Arms of the Angel" or simply "Arms of the Angel") is a song by Sarah McLachlan that originally appeared on her 1997 album Surfacing. As McLachlan explained on VH1 Storytellers, the song is about the Smashing Pumpkins touring keyboard player Jonathan Melvoin, who overdosed on heroin and died in 1996. "Angel" was McLachlan's second consecutive top 5 hit on the Billboard Hot 100 chart, debuting at number twelve, and then jumping to the top ten the following week, before peaking at number four. It remained at the top ten for nineteen weeks, and for twenty-nine weeks in the top 100. "Angel" was the eighteenth most successful song of 1999. Show Angel piano sheet

Sarah Ann McLachlan (born January 28, 1968) is a Canadian musician, singer, and songwriter. Known for her emotional ballads and mezzo-soprano vocal range, as of 2009, she has sold over 40 million albums worldwide. McLachlan's best-selling album to date is Surfacing, for which she won two Grammy Awards (out of four nominations) and four Juno Awards. In addition to her personal artistic efforts, she founded the Lilith Fair tour, which showcased female musicians. The Lilith Fair concert tours took place from 1997 to 1999, and resumed in the summer of 2010. More piano sheets by Sarah McLachlan