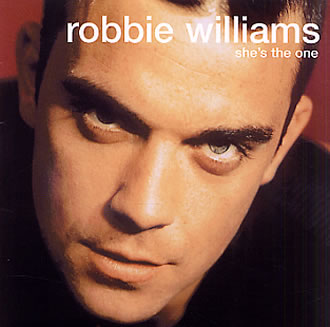 She's The One description

"She's the One" is a song by World Party, written by Karl Wallinger, recorded and released on World Party's 1997 album Egyptology. In 1999 it was covered by Robbie Williams and released as a double A-side single with "It's Only Us". It was the fourth single from I've Been Expecting You and 1999 compilation album The Ego Has Landed. The song became Williams' second number-one single in the United Kingdom. Williams featured in a campy and tongue-in-cheek music video where he was a figure skater. In the video he performs a backflip, which is actually illegal in competitive figure skating. The song went on to win a number of awards around the world, including a BRIT Award for Single of the Year and Best British Video in 2000, an... Show She's The One piano sheet

Robert Peter "Robbie" Williams (born 13 February 1974) is an English singer-songwriter, and occasional actor. He is a member of the pop group Take That, but has found greater commercial success as a solo artist. Williams rose to fame in the band's first run in the early- to mid-1990s. After many disagreements with the management and group members, Williams left the group in 1995 to launch his solo career. On 15 July 2010, it was announced he had rejoined Take That and that the group intended to release a new album in November 2010 which became the second fastest-selling album in UK chart history and the fastest-selling record of the century so far. In 2006 Williams entered the Guiness Book of World Records for selling 1.6 million tickets of his Close Encounters Tour in a single day. Williams has sold over 70 million records worldwid... More piano sheets by Robbie Williams