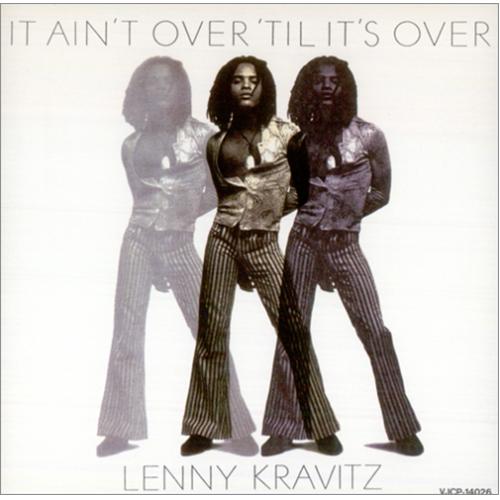 It Ain't Over 'til It's Over description

"It Ain't Over 'til It's Over" is a song recorded, written, and produced by American musician Lenny Kravitz for his second studio album, Mama Said (1991). Released as the album's second single in June 1991, the song is a mid-tempo ballad, musically inspired by Motown, Philly soul, and Earth, Wind & Fire. The horn line at the end is actually performed by the Phenix Horns from Earth, Wind & Fire. "That song just came out one day, and I knew it had a classic vibe. And I still love that song very much today", Kravitz said in an interview for VivaMusic.com in 2000. The line is based on a Yogiism, or quotation from Yogi Berra: "It ain't over 'til it's over." It was his first Top 10 on Billboard Hot 100 of his career, is still his best p... Show It Ain't Over 'til It's Over piano sheet

Leonard Albert "Lenny" Kravitz is an American singer-songwriter, multi-instrumentalist, record producer, actor and arranger, whose "retro" style incorporates elements of rock, soul, R&B, funk, reggae, hard rock, psychedelic, folk and ballads. In addition to singing lead and backing vocals, Kravitz often played all the guitar, bass, drums, keyboards and percussion himself when recording. He is known for his elaborate stage performances and music videos.
He won the Grammy Award for Best Male Rock Vocal Performance four years in a row from 1999 to 2002, breaking the record for most wins in that category as well as setting the record for most consecutive wins in one category by a male. He has been nominated for and won other awards, including American Music Awards, MTV Video Music Awards, Radio Music Awards, BRIT Awards and Blockbuster... More piano sheets by Lenny Kravitz