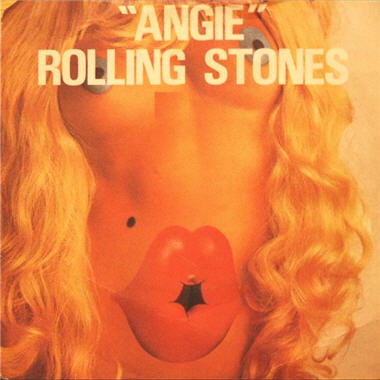 "Angie" is a song by rock band The Rolling Stones, featured on their 1973 album Goats Head Soup. Written by Mick Jagger and Keith Richards and recorded in November and December 1972, "Angie" is an acoustic guitar driven ballad which tells of the end of a romance. Rolling Stones-recording regular Nicky Hopkins plays the song's distinctive piano accompaniment. The strings on the piece (as well as "Winter") were arranged by Nicky Harrison. One unusual feature of the original recording is that singer Mick Jagger's vocal guide track (made before the final vocals were performed) is faintly audible throughout the song (an effect sometimes called a "ghost vocal"). Show Angie piano sheet

The Rolling Stones are an English rock band formed in London in 1962. The first settled line-up consisted of Brian Jones on guitar and harmonica, Ian Stewart on piano, Mick Jagger on lead vocals, harmonica and maracas, Keith Richards on guitar and vocals, Bill Wyman on bass and Charlie Watts on drums. Since Wyman's retirement in 1993, the band's full members have been Jagger, Richards, Watts and guitarist Ronnie Wood who joined in 1975, replacing Mick Taylor (who followed Jones). Jones founded and led the band, but Jagger and Richards assumed leadership after becoming the band's primary songwriters, as Jones' physical and mental troubles gradually incapacitated him prior to his drowning death in 1969. Longtime regular bassist Darryl Jones and keyboardist Chuck Leavell are not full band members. The Rock and Roll Hall of Fame inducted the ... More piano sheets by The Rolling Stones

The Rolling Stones - Paint It, Black
The Rolling Stones - Brown Sugar
Krezip - Out Of My Bed
Fisher - I Will Love You
AC/DC - Back in Black
Josh Groban - Remember
Britney Spears - Oops!... I Did It Again
Bruno Mars - Young Girls
David Bowie - Let's Dance