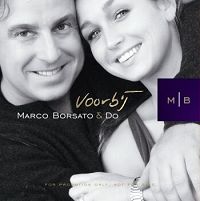 Voorbij is a hit single by the Dutch singer Marco Borsato and singer Do. The song was written after Borsato's hit Afscheid nemen bestaat niet and is the second single from his album Zien. For Borsato's Voorbij is his 20th hit in the Dutch Top 40, and his seventh No. 1 hit, the second in a row. For Do is her third song and her first No. 1 hit. Show Voorbij piano sheet

Marco Borsato is a Dutch singer. He started performing in Italian before switching to Dutch in 1994.
Marco brought out 3 albums with Italian songs, but it wasn't until 1994 that Marco gained popularity after his first Dutch single "Dromen Zijn Bedrog" which reached number one and remained number one for 12 weeks. His second single "Waarom Nou Jij" also reached the first place in the Dutch "Top 40."
Many of his songs are actually Dutch covers or adaptations of Italian songs, (for example by Riccardo Fogli, Giorgia, Riccardo Cocciante, Claudio Baglioni, Marco Masini and Zucchero). In particular, he had quite a success with an adaptation of Margherita by Riccardo Cocciante. Because the majority of Marco's songs are originally written in Italian he has recently decided to compose songs in Dutch, after which he has become far mor... More piano sheets by Marco Borsato