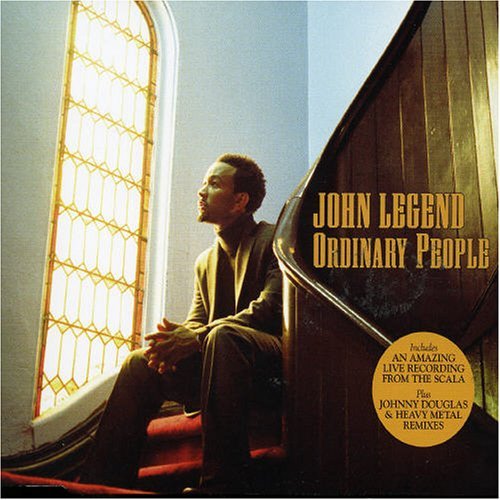 "Ordinary People" is the second single from John Legend's album Get Lifted. The single has been certified gold by the RIAA. Critics were positive towards the song, praising it for its raw emotion and simplicity. The song, written by will.i.am and Legend, won the Grammy Award for Best Male R&B Vocal Performance. The song's lyrical themes include contrast, contradiction, guilt, doubt and fear. Legend sings about how people make errors of judgment in relationships, and that fighting and making up in the end is a regular obstacle. Show Ordinary People piano sheet

John Roger Stephens, better known by his stage name John Legend, is an American singer-songwriter and actor. He has won nine Grammy Awards, and in 2007, he received the special Starlight Award from the Songwriters Hall of Fame.
Prior to the release of his debut album, Stephens' career gained momentum through a series of successful collaborations with multiple established artists. Stephens added his voice to those of other artists, assisting in them reaching chart-topper hits. He lent his voice to Magnetic Man's "Getting Nowhere," Kanye West's "All of the Lights", on Slum Village's "Selfish" and Dilated Peoples' "This Way". Other artists included Jay-Z's "Encore", and he sang backing vocals on Alicia Keys' 2003 song "You Don't Know My Name" and Fort Minor's "High Road". Stephens played piano on Lauryn Hill's "Everything Is Everythin... More piano sheets by John Legend

John Legend - It Don't Have to Change
John Legend - Tonight (Best You Ever Had) (feat. Ludacris)
Atomic Kitten - Hippy
John Mayer - Daughters
N Sync - (God Must Have Spent) A Little More Time on You
Simon & Garfunkel - The Sound of Silence
Adele - Best For Last
Thirty Seconds to Mars - The Kill (Bury Me)
Justin Timberlake - Take It From Here