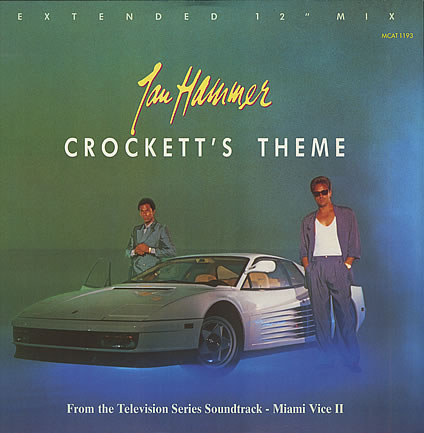 "Crockett's Theme" is an instrumental song written for the hit NBC series Miami Vice. The surname Crockett refers to Don Johnson's character, James "Sonny" Crockett. The initial version of the theme first appeared in the episode Calderone's Return: Part 1 - The Hit List which aired on October 19, 1984. The song was composed by Jan Hammer. Although not a big success in the United States, the song was a smash hit in the UK, reaching #2 in the singles chart there. It was a #1 in the Netherlands for 4 weeks. It was not originally called "Crockett's Theme", but its success led Jan Hammer to feature the original version on his 1987 album Escape from Television. Show Crockett's Theme (Miami Vice) piano sheet

Jan Hammer is a composer, pianist and keyboardist. He first gained his most visible audience while playing keyboards with the Mahavishnu Orchestra in the early 1970s, as well as his film scores for television and film including "Miami Vice Theme" and "Crockett's Theme", from the popular 1980s program, Miami Vice. He continued to work as both a musical performer and producer, expanding to producing film later in his career. Hammer has collaborated with some of the era's most influential jazz and rock musicians such as Jeff Beck, Al Di Meola, Mick Jagger, Carlos Santana, Stanley Clarke, Tommy Bolin, Neal Schon, Steve Lukather, and Elvin Jones among many others. He has composed and produced at least 14 original motion picture soundtracks, the music for 90 episodes of Miami Vice and 20 episodes of the popular British television series Chance... More piano sheets by Jan Hammer