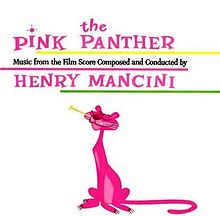 "The Pink Panther Theme" is an instrumental composition by Henry Mancini written as the theme for the 1963 film The Pink Panther and subsequently nominated for the 1964 Academy Award for Original Music Score. The cartoon character created for the opening credits of the movie by David DePatie and Friz Freleng was animated in time to the tune.The soloist of this song was Plas Johnson. RCA Records released the tune as a single in 1964; it reached the Top 10 on the Billboard adult contemporary chart and won three Grammy Awards. It was featured in the opening credits of all The Pink Panther films, with the exception of A Shot in the Dark, and Inspector Clouseau. Show The Pink Panther Theme Song piano sheet