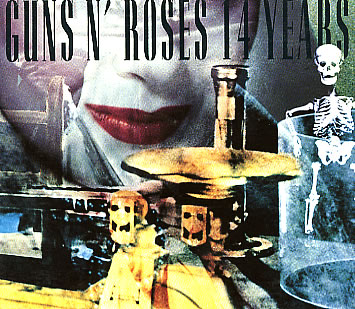 "14 Years" is the second track on the Guns N' Roses album Use Your Illusion II. This song is one of the few Guns N' Roses songs sung fully by Izzy Stradlin, with the exception of the chorus sung along with Rose. The song was only performed live when Stradlin was still in the band. It is about Rose's and Stradlin's friendship as they knew each other for 14 years. An earlier demo used different lyrics, though the first verse and the chorus were only slightly modified, while the second and third verses were given a complete makeover. Parts of the demo's second verse, would be used in the third verse of the final version, while the demo's third verse is a slightly modified version of the demo's first verse. The song recently resurface... Show 14 Years piano sheet

Guns N' Roses - November Rain
Bullet for My Valentine - Your Betrayal
The Beatles - Eleanor Rigby
J. Cole - Sideline Story
Amy Grant - Father's Eyes
Michael Nyman - Big My Secret
Norah Jones - What Am I to You?
Barry Manilow - Can't Smile Without You
U2 - I Still Haven't Found What I'm Looking For