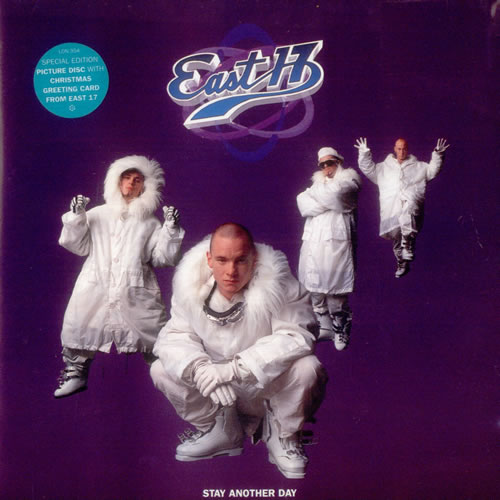 "Stay Another Day" is a 1994 pop song recorded by British boy band East 17. It was released in late 1994 and became their first and only UK number-one single reaching Christmas number one, and also topped the charts in Sweden, Ireland and Denmark. The song was used in the pilot episode of the BBC drama series Dirk Gently. It was also the 4th biggest selling boyband single of the 90's in the UK and has sold 910,000 copies and has received a Platinum sales status certification. Tony Mortimer won an Ivor Novello songwriting award for this song. The single was also nominated for 'Best Single' at the Brit Awards in 1995. Show Stay Another Day piano sheet

East 17 are a rap boy band comprising Tony Mortimer, John Hendy and Terry Coldwell. Tony Mortimer is the group's frontman and primary songwriter. Formed in Walthamstow, London in 1991, the group have achieved 18 Top 20 singles and four Top 10 albums, and were one of the UK's most popular boy bands during the early to mid-1990s. The group went on to sell 20 million records worldwide. Their boy band style was unique occasionally blending rap and pop in songs such as "House of Love", "Steam" and "Let It Rain".

The band began in 1991 when Tony Mortimer was promised a record deal after he showcased his own material. The deal was granted under the condition that he form a group, which was the format London Records were looking for.
The group was named East 17 after the postcode of their hometown, Walthamstow. The original ro... More piano sheets by East 17