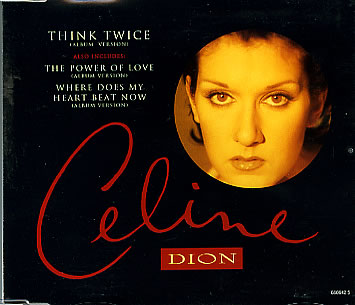 "Think Twice" is a song by Canadian recording artist Céline Dion. It was written by British songwriters Andy Hill, who had achieved success a decade earlier for his work with Bucks Fizz, and Peter Sinfield, a former member of rock group King Crimson. Production on the track was handled by Aldo Nova and Christopher Neil. The song is rock-influenced and features a guitar solo, one of only a few of Dion's songs to do so, performed by Nova. It was released as the fourth single from Dion's The Colour of My Love (1993) album on July 18, 1994 in North America, in October 1994 in the United Kingdom, Australia and Japan, and February 1995 in the rest of the world. Show Think Twice piano sheet