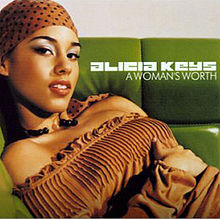 A Woman's Worth description

"A Woman's Worth" is a song by American singer–songwriter Alicia Keys. A piano-driven soul ballad with elements of contemporary R&B and neo soul, it was written by herself and musician Erika Rose and produced by Keys for her debut album, Songs in A Minor (2001). The track was released as the album's second single in February 2002 following the worldwide success of her debut single the previous year, and became another top ten success for Keys in New Zealand and the United States, where it also reached number three on the U.S. Billboard Hot R&B/Hip-Hop Songs chart. The accompanying music video, directed by Chris Robinson, is a continuation of the "Fallin'" video and explored what happens when Keys' onscreen love interest gets ... Show A Woman's Worth piano sheet

Alicia Augello Cook (born January 25, 1981), known professionally as Alicia Keys, is an American actress and singer-songwriter. Keys' debut album, Songs in A Minor, was a commercial success, selling over 12 million copies worldwide. She became the best-selling new artist and best-selling R&B artist of 2001. The album earned Keys five Grammy Awards in 2002, including Best New Artist and Song of the Year for "Fallin'". Her second studio album, The Diary of Alicia Keys, was released in 2003 and was also another success worldwide, selling eight million copies. More piano sheets by Alicia Keys