Send "Afroman" Ringtones to your Cell

Joseph Edgar Foreman, better known by his stage name Afroman, is an American rapper who came to prominence with his singles "Because I Got High" and "Crazy Rap". He was nominated for a Grammy award in 2002.
In 1999, he released his first album, My Fro-losophy; he later relocated to Hattiesburg, Mississippi, where he met drummer Jody Stallone, keyboardist/bassist Darrell Havard, and producer Tim Ramenofsky (aka "Headfridge").
Ramenofsky produced and released Afroman's second album Because I Got High in 2000 on T-Bones Records; it initially was distributed primarily through concerts and the file-sharing service Napster before its title track was played on The Howard Stern Show. Afroman based the song's lyrical content on his inability or unwillingness to clean his room; and ran with the idea of everyday tasks being derailed by drug use. In late 2001, the song became a worldwide hit and was featured in the films Jay and Silent Bob Strike Back, The Perfect Score, and Disturbia later in the 2000s. 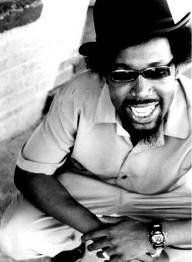