How Deep Is Your Love - Take That Free Piano Sheet Music 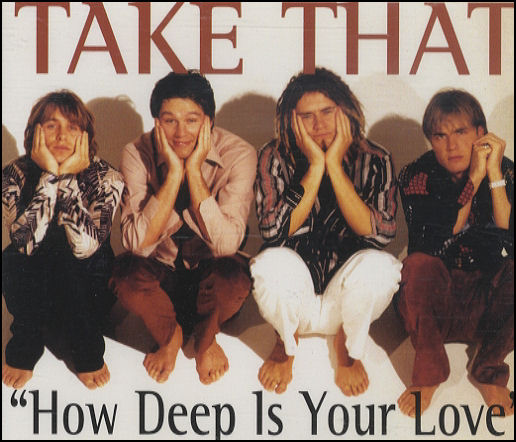 How Deep Is Your Love description

"How Deep Is Your Love" is a pop song written and recorded by the Bee Gees in 1977 and released as a single in September. Take That's version was released as a single from their Greatest Hits compilation in 1996. The single went on to become what was to be the band's final UK number one until their 2006 comeback single "Patience" a decade later. The song stayed at number one in the UK charts for three weeks. The single sold 671,000 copies and has received a Platinum sales status certification in the UK. The song also topped the charts in Denmark, Ireland, Italy, Japan and Spain. Show How Deep Is Your Love piano sheet

Take That are a British five-piece vocal pop group comprising Gary Barlow, Howard Donald, Jason Orange, Mark Owen and Robbie Williams. Barlow acts as the lead singer and primary songwriter. In total, the group have had 27 top 40 singles and 16 top 5 singles in the United Kingdom alone, 11 of which have reached number 1, as well as having seven number 1 albums. Internationally the band have had 54 number one hits and 35 number 1 albums.
Take That's pop tunes and soulful ballads dominated the UK charts in the first half of the 1990s, winning multiple BRIT Awards while also spawning two of the best selling albums of the decade with Everything Changes (which was nominated for the 1994 Mercury Prize) and their Greatest Hits album. Robbie Williams left the band in 1995 while the four remaining members completed their world tour and rele... More piano sheets by Take That

Take That - Could It Be Magic
Abba - I Have a Dream
Martina McBride - I'm Gonna Love You Through It
Gavin DeGraw - I Don't Want to Be
Megan and Liz - Are You Happy Now?
Bruce Springsteen - Better Days
The Beatles - Blackbird
Christina Aguilera - Keeps Gettin' Better
Glenn Miller - Moonlight Serenade