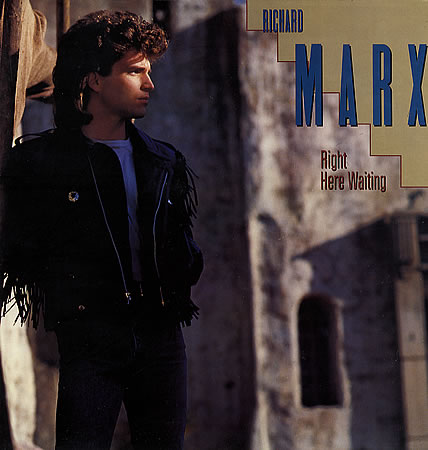 "Right Here Waiting" is a ballad recorded by Richard Marx on his second album, Repeat Offender. The song hit number one on the Billboard Hot 100 and peaked at #2 in the United Kingdom. "Right Here Waiting" was the second single from Repeat Offender, after "Satisfied". Marx wrote the song on the road as a love letter to his wife, actress Cynthia Rhodes, who was in South Africa shooting for a film. In an era of power ballads, "Right Here Waiting" distinguished itself by its understatement; the track was arranged by Marx with Jeffery (C.J.) Vanston to feature none of the heavy drums and synth popular at the time, with Marx's vocal accompanied only by classical guitar (by Bruce Gaitsch) and keyboards (by Vanston). It is one of Marx's... Show Right Here Waiting piano sheet

Richard Noel Marx is an American adult contemporary and pop/rock singer, songwriter, musician, and record producer. He had a stream of hit singles in the late 1980s and 1990s, including "Endless Summer Nights", "Right Here Waiting", "Now and Forever", and "Hazard". Although most of his major hit songs were slow ballads, many of his songs had a classic rock style, such as "Don't Mean Nothing", "Should've Known Better," "Satisfied," and "Too Late To Say Goodbye". Marx placed himself in the record books by being the first solo artist to have his first seven singles hit the Top 5 on the Billboard Hot 100 singles chart (3, 3, 2, 1, 1, 1, 4). His record sales worldwide exceed 30 million. Aside from songs that he's written and recorded for himself, he has written, co-written, and produced successful tracks for other artists such as "This I Promi... More piano sheets by Richard Marx