You Must Love Me (Evita) - Madonna Free Piano Sheet Music 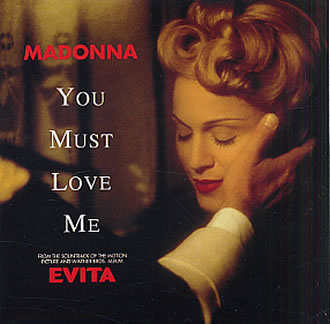 You Must Love Me (Evita) description

"You Must Love Me" is a pop ballad recorded by American singer-songwriter Madonna from the soundtrack album Evita of the motion picture of the same name. It was released in October 1996 by Warner Bros. as the first single from the album. Written by Tim Rice and Andrew Lloyd Webber, the song won an Academy Award for Best Original Song in 1997. It was seen by critics as her "new adult, matriarchal image". Show You Must Love Me (Evita) piano sheet

Madonna (born Madonna Louise Ciccone on August 16, 1958) is an American singer, songwriter, actress, director, dancer, and entrepreneur. She has sold more than 300 million records worldwide and is recognized as the world's best-selling female recording artist in history by Guinness World Records.
Considered to be one of the "25 Most Powerful Women of the Past Century" by Time for being an influential figure in contemporary music, she is known for continuously reinventing both her music and image, and for retaining a standard of autonomy within the recording industry. Critics have praised her diverse musical productions which have also been known to induce controversy.
According to the Recording Industry Association of America (RIAA), Madonna is the best-selling female rock artist of the 20th century and the second top-sellin... More piano sheets by Madonna

Madonna - Evita - You Must Love Me - PianoHelp.net