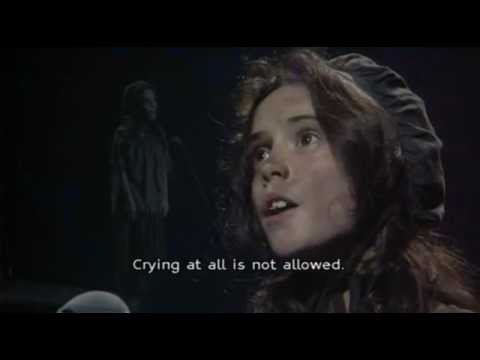 Castle on a Cloud description

Castle on a Cloud is a solo for the part of young Cosette. She sings about a castle where she does not have to sweep floors and a lady all in white looks after her. French Versions 1980 Original French Version — The main song is called Mon prince est en chemin (My Prince is On the Way) where it is preceded by a long instrumental section. The part where Cosette is caught by Mme Thénardier is called Mam'zelle Crapaud (Miss Toad) that is added onto the end of "Castle on a Cloud" in the English version. 1991 Parisian Revival Version — This song is known as Une poupée dans la vitrine (A Doll in a Window). This is a reference to the book; to a doll, Cosette has seen in a shop and which Valjean will later buy for her. Show Castle on a Cloud piano sheet

Les Misérables (play /leɪ ˈmɪzərɑːb/ or /leɪ ˌmɪzəˈrɑːb/; French pronunciation: [le mizeˈʁablə]), colloquially known as Les Mis or Les Miz /leɪ ˈmɪz/, is a sung-through musical play based on the novel of the same name by French poet and playwright Victor Hugo. It has music by Claude-Michel Schönberg, original French lyrics by Alain Boublil and Jean-Marc Natel, with an English-language libretto by Herbert Kretzmer. Set in early 19th-century France, it is the story of Jean Valjean, a burly French peasant of abnormal strength and potentially violent nature, and his never ending quest for redemption after serving 20 years in jail for having stolen a loaf of bread for starving relatives. Valjean decides to break his parole and start his life anew after a kindly Bishop inspires him to, but he is relentlessly tracked down by... More piano sheets by Les Miserables