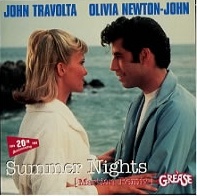 Summer Nights" is a popular song from the musical Grease. Written by Jim Jacobs and Warren Casey, its best-known version was recorded by John Travolta and Olivia Newton-John for the big-screen adaptation of the musical, and released as a single that same year. "Summer Nights" became a massive hit in both the United States and United Kingdom during the summer of 1978. Included on the movie's soundtrack album, the song was one of several hit singles from the movie. Parts of the song were introduced to a new audience when it was re-released in the 1990s as part of a megamix of several songs from the movie version. Show Summer Nights (Grease) piano sheet

John Travolta & Olivia Newton John are the main actors and singers from the 1978 musical Grease. Grease is a 1978 American musical film directed by Randal Kleiser and produced by Paramount Pictures. It is based on Warren Casey's and Jim Jacobs's 1971 musical of the same name about two lovers in a 1950s high school. The film stars John Travolta, Olivia Newton-John, Stockard Channing, and Jeff Conaway. It was successful both critically and at the box office; its soundtrack album ended 1978 as the second-best selling album of the year in the United States, behind the soundtrack of Saturday Night Fever, another film starring Travolta. More piano sheets by John Travolta & Olivia Newton John