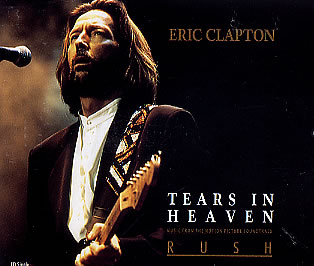 "Tears in Heaven" is a song by Eric Clapton and Will Jennings from the soundtrack to the film Rush. The song was written about the pain and loss Clapton felt following the death of his four-year-old son, Conor. Conor fell from a window of the 53rd-floor New York apartment belonging to his mother's friend on March 20, 1991. Clapton arrived at the apartment shortly after the accident, and was distraught over his son's death. "Tears in Heaven" is one of Clapton's most successful songs, as it reached number two on the Billboard Hot 100 singles chart in the U.S. The song also stayed three weeks as #1 on the American adult contemporary chart in 1992. Show Tears In Heaven piano sheet

Eric Patrick Clapton is an English guitarist and singer-songwriter. Clapton is the only three-time inductee to the Rock and Roll Hall of Fame: once as a solo artist, and separately as a member of The Yardbirds and Cream. Clapton has been referred to as one of the most important and influential guitarists of all time. Clapton ranked second in Rolling Stone magazine's list of the "100 Greatest Guitarists of All Time" and fourth in Gibson's Top 50 Guitarists of All Time. More piano sheets by Eric Clapton