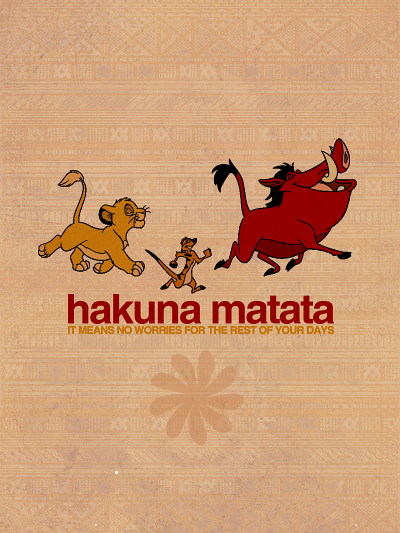 Hakuna Matata" is a song from Disney's 32nd animated feature The Lion King. The song is based on Timon and Pumbaa's common catchphrase in the movie, Hakuna matata, which is a Swahili phrase. It is characterized by its simple 4/4 time, upbeat message and catchy lyrics. The musical score was written by Elton John and the lyrics by Tim Rice. Rice has stated that the lyrics were inspired by the British tv sitcom Bottom. In the film the song is sung by Timon (a meerkat voiced by Nathan Lane), Pumbaa (a warthog voiced by Ernie Sabella), and Simba, a young lion voiced by Jason Weaver (singing voice as a cub) and Joseph Williams (as an adult). Show Hakuna Matata (Lion King soundtrack) piano sheet