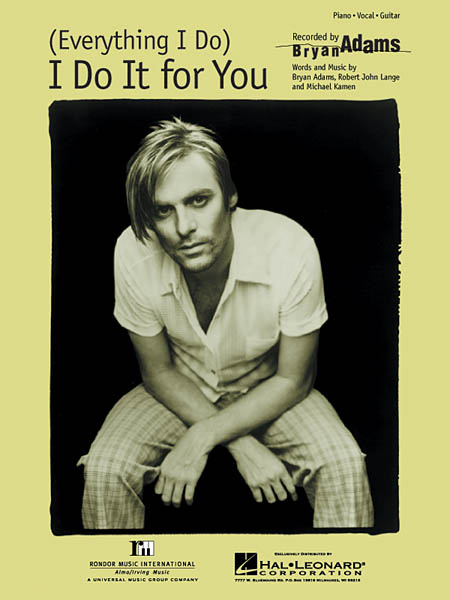 (Everything I Do) I Do It for You description

"(Everything I Do) I Do It for You" is a power ballad performed by Canadian rock singer Bryan Adams and co-written with Michael Kamen and Robert John "Mutt" Lange, featured on the soundtrack album from the 1991 film Robin Hood: Prince of Thieves and on Adams' album Waking Up the Neighbours. It was an enormous chart success internationally, particularly in the United Kingdom, where it spent sixteen consecutive weeks at number one on the UK Singles Chart (the longest in British chart history), seven weeks at number one on the Billboard Hot 100 in the United States, and nine weeks atop the RPM singles chart in Canada. It was a number one hit on many charts and sold 8 million copies worldwide, making it Adams' most successful song. Show (Everything I Do) I Do It for You piano sheet

Bryan Adams, (born Bryan Guy Adams 5 November 1959) is a Canadian rock singer-songwriter, guitarist, bassist, producer, actor and photographer. For his contributions to music, Adams has many awards and nominations, including 20 Juno Awards among 56 nominations, 15 Grammy Award nominations including a win for Best Song Written Specifically for a Motion Picture or Television in 1992. He has also won MTV, ASCAP, and American Music awards. In addition, he has won two Ivor Novello Awards for song composition and has been nominated for several Golden Globe Awards and three times for Academy Awards for his songwriting for films. More piano sheets by Bryan Adams

Bryan Adams - Everything I Do Piano Sheets - PianoHelp.net