I'm Not a Girl, Not Yet a Woman - Britney Spears Free Piano Sheet Music 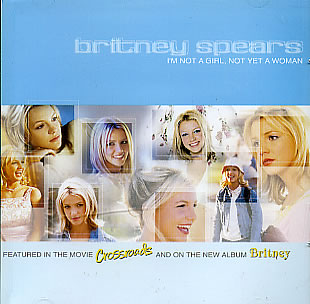 I'm Not a Girl, Not Yet a Woman description

"I'm Not a Girl, Not Yet a Woman" is a song by American recording artist Britney Spears. The song was written by Dido, with additional writing and song production by Max Martin and Rami Yacoub for Spears' third studio album, Britney (2001). It was released on February 5, 2002 by Jive Records, as the second single from the album in the United States and Canada and the third worldwide. The soft rock song, speaks about the angst and heartache of puberty, and was considered by Spears as inspirational and one of her favorites that she has ever sung. Show I'm Not a Girl, Not Yet a Woman piano sheet

Britney Jean Spears is an American recording artist and entertainer. Born in McComb, Mississippi, and raised in Kentwood, Louisiana, she began performing as a child, landing acting roles in stage productions and television shows. She signed with Jive Records in 1997 and released her debut studio album ...Baby One More Time in 1999, which became the best-selling album by a teenage solo artist. During her first decade in the music industry, she became a prominent figure in mainstream popular music and popular culture, followed by a much-publicized personal life. Her first two albums established her as a pop icon and broke sales records, while title tracks "...Baby One More Time" and "Oops!... I Did It Again" became international number-one hits. Spears was credited with influencing the revival of teen pop during the late 1990s, and became t... More piano sheets by Britney Spears