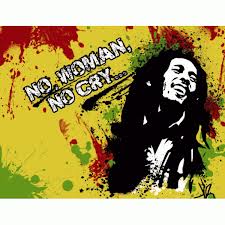 No Woman No Cry description

"No Woman, No Cry" is a reggae song by Bob Marley & The Wailers. The song first became known in 1974 through the studio album Natty Dread. The live version from the 1975 album Live! is best known - it was this version which was released on the greatest hits compilation Legend. The original demo version of the song which is unreleased was a Gospel version. This version had only the piano riff as the main instrument and was recorded in London for Island Records in 1973 with Peter Tosh and some unknown female backing singers. At the same time of this recording, the demo of the Island version of "Lively up Yourself" was recorded. This was the last time all three original Wailers (Bob Marley, Peter Tosh and Neville "Bunny" Livingston ... Show No Woman No Cry piano sheet

Bob Marley was a Jamaican singer-songwriter and musician. He was the rhythm guitarist and lead singer for the ska, rocksteady and reggae bands The Wailers (1963-1974) and Bob Marley & The Wailers (1974–1981). Marley remains the most widely known and revered performer of reggae music, and is credited with helping spread both Jamaican music and the Rastafari movement to a worldwide audience. Marley's music was heavily influenced by the social issues of his homeland, and he is considered to have given voice to the specific political and cultural nexus of Jamaica. His best-known hits include "I Shot the Sheriff", "No Woman, No Cry", "Could You Be Loved", "Stir It Up", "Get Up Stand Up", "Jamming", "Redemption Song", "One Love" and, "Three Little Birds", as well as the posthumous releases "Buffalo Soldier" and "Iron Lion Zion". The compilat... More piano sheets by Bob Marley