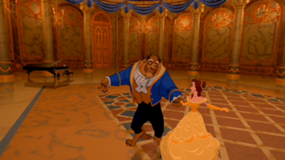 Beauty and the Beast is the leading single from the Academy Award Best Picture nominated animated film of the same name. he song is a ballad about the love developing between Belle and the Beast. It was written by composer Alan Menken and late lyricist Howard Ashman. It was one of Ashman's last works before he died of AIDS in 1991. Fans seemed to have nicknamed this song "'Tale as Old as Time". It earns its nickname because of the chorus. The song is ranked #62 on the list AFI's 100 years...100 songs, along with When You Wish Upon a Star (#7), Some Day My Prince Will Come (#19), and Hakuna Matata (#99) is one of the only four songs from Disney that made the cut. Show Beauty and the Beast Theme Song piano sheet

Theme Song From Beauty and the Beast Piano Sheet - PianoHelp.net