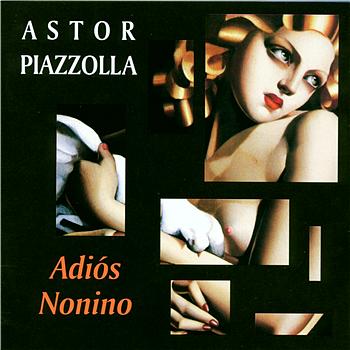 Adiós Nonino (Farewell, Nonino) is a composition by tango composer Ástor Piazzolla, written in October 1959 while in New York, in memory of his father, Vicente "Nonino" Piazzolla, a few days after his father's death. The piece was based on his earlier tango Nonino, composed in París in 1954, of which he kept the rhythmic part and re-arranged the rest with some additions. It would prove to be one of Piazzolla's most well-known and popular compositions, and has been recorded many times with many different arrangements and with various instruments. Show Adios Nonino piano sheet

Astor Pantaleón Piazzolla was an Argentine tango composer and bandoneón player. His oeuvre revolutionized the traditional tango into a new style termed nuevo tango, incorporating elements from jazz and classical music. A virtuoso bandoneónist, he regularly performed his own compositions with a variety of ensembles.

After leaving Troilo's orchestra in the 1940s, Piazzolla led numerous ensembles beginning with the 1946 Orchestra, the 1955 Octeto Buenos Aires, the 1960 "First Quintet", the 1971 Conjunto 9 ("Noneto"), the 1978 "Second Quintet" and the 1989 New Tango Sextet. As well as providing original compositions and arrangements, he was the director and bandoneón player in all of them. He also recorded the album Summit with jazz baritone saxophonist Gerry Mulligan. His numerous compositions include orchestral work such a... More piano sheets by Astor Piazzolla