Send "Berlin" Ringtones to your Cell

Berlin is an American synthpop band. The group was formed in Los Angeles in 1978 by John Crawford (bass guitar). Bandmembers included Crawford, Terri Nunn (vocals), David Diamond (keyboards), Ric Olsen (guitar), Matt Reid (keyboards) and Rod Learned (drums). Learned left during the first EU tour and was replaced by Rob Brill (drums). The band gained mainstream-commercial success in the early 1980s with singles including "The Metro", "Sex (I'm A...)", "No More Words" and then in the mid 80s with chart-topping single "Take My Breath Away" from the 1986 film Top Gun. 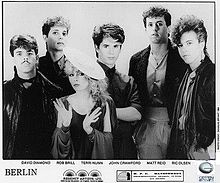